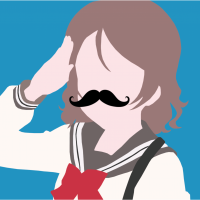 How did I get into LoveLive and what it means to me?

It's a story I most definitely love to tell and will never forget because thinking back; it's just so entertaining and special to me.

It started before I even knew what a LoveLiver was.(I was a little new to the internet and it's slang). I was also very new to anime; only have watched K-On, Squid Girl, and a bit of Ouran Highschool Host Club because of my older sister. Because of those things, I GUESS it was, like, my awakening to liking girls but I just DIDN'T know. At that time, I was REALLY into My Little Pony and Tumblr was VERY filled with the MLP fans so I occasionally looked at tumblr posts of MLP art and such. But then one day I stumbled across a fanart of EliUmi and my dense mind awakened and thought "WOWOWOWOWOW THAT'S SO CUTE. THEY LOOK CUTE TOGETHER. WHAWHAWHA--" and looked through the EliUmi tag having the thought that they were POPULAR and ORIGINAL OC CHARACTERS ON TUMBLR. After going on and on secretly looking at pure EliUmi fanart, I realized they are from a show called "LoveLive", so of COURSE I checked it out! Pretty sure I was kind of disappointed that they weren't the main protagonists(like Honoka protagonist level), but for some reason I continued watching it anyway. The genre, plot, everything was new to me. I thought, "This is super different but not different from K-On or MLP!!??". and through that, I ended up finishing the series.

I was very hooked to the series(still am!) so I was sad that I finished everything; but throughout my journey I find out about the seiyuus, enjoyed the niconamas subbed and posted on YouTube, and was overjoyed hearing a new group is coming along to LoveLive!(Aqours), that's when I decided to change my once an MLP Instagram account- to a LoveLive fanpage and strive from there!

LoveLive means alot to me because it widened my experiences and my enjoyment. I admire the characters very much and I probably wouldn't be the person I am today without this franchise. The show, casts, and performances, encourages me to keep moving forward despite alot of major bumps along the road. Honestly, I can't even IMAGINE who I'd be without LoveLive!! I can't thank LL enough for all it's inspired me to do and take. Thank you, friends!