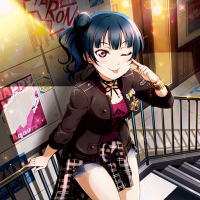 One of my friends told me to pay the game, and like the fandom seeking kiddo I was, I downloaded it!

I hadn't seen the anime yet, so when prompted to choose my starter, I chose based purely on looks.

I had a great time playing the game, doing solos, getting super excited about rares from the friend points box.

Getting extremely excited about sr and ssr cards, even if they were initial.

My favorite N card, and overall girl at the time was Sachiko.

I liked her whole supernatural deal.

I was on my way to a field trip, when I got my very first ur.

I did a blue ticket pull, and got swimsuit Eli in return!

I was so excited!

I had watched the anime at that point, and I really loved it.

I did vastly prefer Muse at the time, though.

But eventually, I did fall out of love with the series after a bit.

It wasn't really what I needed at the time.

But around Christmas, 2018, I was discovering a love for rhythm games after playing a lot of persona dancing,

and I decided to open the app again.

and I fell in love again.

I immediately saw Yohane as my best girl after I realized how much we had in common.

And I do really love her.

I started learning how to seriously play the game and I started saving up fro my favorite cards once I saw them on school idol tomodachi.

I loved ac next stage Yohane, but my absolute favorite,

I adored her design, so, so much.

I neeeeded to have her.

I saved up all year for her birthday, with some splurges along the way for ac Yohane and Mari. (I did get them though!)

But once her birthday came around,

I got her limited birthday, and summer ur!

No punk rock though..

After a while of loving love live, almost a year had passed

and it was time for all stars to come out.

and I was excited!

I downloaded it, and I had a great time!

The future of Love Live, and my time loving it, looks bright.

and that's pretty much the end of the story.

Until the other week.

I saw the new limited boxes.

I used all of my gems,

and at the very last chance...