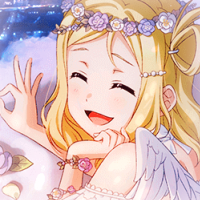 It all started circa 2015. I had just gotten heavily into idols thanks to Aikatsu!, PriPara, and Pretty Rhythm. I was bored one Saturday and decided to check out this show called Love Live!. I watched the first few episodes, but my fifth-grade self got bored and forgot about it. Until I discovered that this show had a mobile rhythm game called Love Live! School Idol Festival. My first account was on my iPad Mini, and my first ever starter was Umi because she seemed introverted, and this was the time in my life where the blue magical girls were automatically far superior to the rest of their magical girl teams. This was back in the days of 2.0, so I got bored of only being able to play Bokura No Live, Yuujo No Change, and Snow Halation and found myself not playing much. I didn’t even have an SR. Fast forward about a year later and I rewatched the full anime and movie after Sunshine was announced. In the year between me deleting SIF and watching the full anime, I had made some major self discoveries and found that I found a different girl to be my favorite. Her name was Nozomi Tōjo, and she’s been my best girl forever. I began playing SIF religiously and even managed to get my first SR, cheerleader Maki, and first UR, Halloween Hanayo. I still have the account today, and I have 15 or 16 URs on the account now, though I haven’t played as much on it anymore after I got a brand new JP account last year with 2nd best Muse girl Nico as my starter. Although the other account has tons of URs, the JP is my favorite because it’s completely F2P and I’ve ranked up higher and even tiered in my first even on it. And of course I started it as a Muse account due to the fact that the game hands out initial Aqours Rs like candy and I wanted a challenge. About a year later, here I am playing SIFAS.