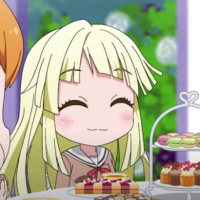 
hi imma shy female who loves bandori and love live~ may love the game but heck, it hates me. my luck on both games is actual trash o(╥﹏╥)o

and don’t mind my profile picture, just rinko from banG dream. I needed this stupidity in my life ;)

not a huge anime fan but I have watched sonic and a bunch of Pokémon if that counts :P (I’ve watched both love live animes, in the process of watching season 3 of bandori. also the last few episodes of ll sunshine almost made me cry ) 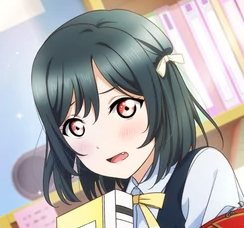 (rina is literally my best anime character in the world, I’m ready to fight for my bby, also dont mind how big shioriko's is i had to get creative since i couldnt find her title anywhere if she even has one :') she's in gold)

pretty much the reasons why I love these 3

- Her voice, her vibe, her board - there’s too much to love. The best thing is the fact that she doesn’t just wear the board because she’s shy (she’s not really, if you can call urself cute that kinda says a lot), she actually has problems with changing her emotions. and that just makes her adorable and lovable. finally, that techno, electronic, video game vibe she has is just lit, ur not changing my mind

- MIRAI ZURAAAAA okay but do you not like her?? I think the whole idea of her being from a temple and not knowing all of the technology and all that is GENIUS, it worked in love live’s favor <3 NOT ONLY THAT BUT SHE LITERALLY HAS THE VOICE OF A GODESS - NO ONE BUT TAKASUKI - SAN COULD HAVE ACTED FOR HANAMARU BETTER I SWEAR SHE HAS ONE OF THE BEST VOICES IN LOVE LIVE

- Probably one of the most relatable girls in all of love live for me. We’re both athletic, dont like skirts and dresses and all that stuff, and just eNeRgEtIc. AND SHE HAS A GODDESS VOICE TOOOO- I DONT KNOW HOW BUT SHE SOUNDS BEAUTIFUL IN KOI NO SIGNAL RIN RIN RIN

AND SHE CAN FREAKING RAP LIKE IF U LISTEN TO WONDERFUL RUSH AS RIN SOLO, BRUH SHE DOES THE RAP BETTER THAN EVERYONE ELSEHSKZBSJSJX

i don’t really like to share my name and age sorry :< I play soccer as a sport, trumpet as an instrument, and other games I play are splatoon 2, bandori, animal crossing, super smash bros, and Pokémon (also I play like a gazillion more games lololol)

protect these children at all costs