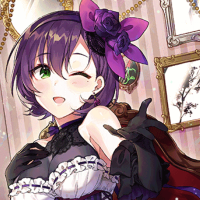 Love Live has kept me alive.

Wow, that's an "angst" way of starting a "Love Live! story" post, but here we are and it's the truth. Okay, so in 2014 I was in second grade and my sister was in sixth. She was really into anime and FNAF, I was into My Little Pony and Warrior Cats. One day, my sister was watching TV, and made the miraculous decision to watch "Sword Art Online". And that's how I got into anime. Soon I watching all those "super indie animes" i.e Attack on Titan, Fairy Tale, Tokyo Ghoul, etc.

So I was deep in the anime black whole, "Weeb Stage" and all. On August 5, 2014, my sister was scrolling through the Google Play Store and spotted an app called "Love Live! School Idol Festival" She downloaded it, and chose Kotori Minami. She, being overwhelmed by the glory of it all ( hah :'''), then showed the app to me, which I then downloaded because "wAifU's". Best decision ever, imo.

When I got it, I chose Nozomi because her voice was cute and I liked her hair color ( purple was my favorite color back then). I was a total noob, I couldn't even finish Nawatobi on expert. Nico was my absoute least favorite, I hated her so much. though she was conceited and annoying, but so did my sister, so that's probably why I hated her, lol. Nozomi soon became my ultimate best girl, she was cute and motherly and I loved her design! Then, on a 5 gem scout, I got the Maid Nico SR. I was freaking out on another level, like, my vibing liscence was sNATCHEd.

I kept playing occasionally, eventually dropping the game and keeping up with Love Live on the internet in the beginning of 2015. In the end of third grade, Aqours was coming out! If you were a fan of Love Live before Aqours came out, then you'd remember when people were comparing the Aqours girls to the Muse ones. People were comparing Mari to Nozomi, so I was like "Oh, I guess she's my best girl?"

Bam. I live in Hawaii, and on my island, I've met like five people who like/know Love Live in my lifetime? I tried getting my friends into it, but looking back on it, it makes sense that third graders wouldn't want to play an anime game? I don't know, anime was like, taboo on my island back then.

At this point, Mari and Nozomi are my best girls, I hate Nico and love Maki. In fifth grade, I actually started forming my own opinions about Love Live, wOwOW. I kind of just focused on Mari and the Muse girls. I didn't really want to bother with Aqours. But late fifth grade, March 14, 2018, I made a Love Live account!

Back then, you still got 30 love gems when making a new account, and it was Umi's birthday the day before, so I used those love gems as fast as I could, you know, so I could get at least one SR for my team. Then the app closed. For a second I was freaking out, "What if I don't get any of the cards?" I re-opened the app, and went into my card deck expecting an SR or at least a single SSR. But then, I saw it! Shiny and with a background... The wondrous letters, "UR" placed above left of the card! I went completely sicko mode, I had gotten Circus Umi! And that was my first UR ever. Thanks Umi!

Fifth going on sixth grade summer, I had discovered the JP server, which I soon gRINDED for Nozomi, Mari, and Chika's birthday. I had gotten many URs, almost all of Muse, a few of Aqours ( My first Aqours UR was Punk Rock Ruby ) and none of Mari's URs. Then came around Black Friday and the 30 dollar packs were out! I had 70 dollars and I was ready to spend it for 2 SSR+ tickets, both Muse and Aqours! I got a lot of URs, mostly Umi and Ruby ( her blessings of URs that day made her my 2nd best girl, replacing Chika.), but even with the SSR+ tickets, no Mari. That was the first time I spent money on Love Live, and I wouldn't be the last.

I realized how lucky my account was and how nice packs are, which resulted in me spending over $300 on Love Live ( whoops. lmao it still resulted in a lot of URs). I deleted all my SRs in pursuit of getting a UR from a blue ticket scout ( hahaha, gambling addiction who? ) and when I didn't, I gave up on that account with all the URs. In the mild recess from Love Live, the wedding set came out and I was very in love with Kanan's unidolized.

I made a new account with intent of being faithful for Mari and Nozomi's birthdays. I had about 150 lovegems saved the first day I made it ( yes, I am dummy grinder with no life.) Space Dia had came out on EN and I had a green ticket, so I used it so I didn't have to 5 gem scout. Whazam, there showed up Space Dia. I cried for about nine hours and then went back to grinding. I got about 180 gems and I was like, "Hey, it won't be bad if I scout."

I lazily pressed the "Scout 11" button, mumbling "Shiny!" in hopes of getting a Mari UR. I skipped the scout because I knew I wouldn't get anything... I was wrong! I got Space Dia AGAIN ( which meant I got to naturally idolize a UR for the first time) and WeDDinG kANAN!!!! I actually cried, idolized Space Dia, and paired with Wedding Kanan. Her lines were so freaking cute and then I realized, "Wait, Kanan's my best girl."

Honestly, imo, Kanan's more like Nozomi than Mari, and ngl, Kanan and Mari are both like Nozomi? I guess I liked Kanan because her voice was really cute and sounded like Nozomi's, too, lol.

And in late sixth grade, uh, I got severely depressed and all my friends left me and I was having family issues. I joined the Love Live! Amino in hopes of meeting people who also liked Love Live and make some friends! And I did! I met a girl who ended up being my girlfriend ( we broke up, but we're still really close friends), I made some online friends who I still talk to and love, and people were appreciating my art! I honestly felt so happy to know and be friends with people who loved Love Live and Nozomi and Kanan like I did!

(if you're suicidal, please talk to someone and don't rely on love live to save you like i did, your life matters and you are loved!!!)

On June 9, I was going to honestly end my life. I had my phone next to me when it buzzed. I looked at what it was, and it was Nozomi's birthday appreciation notif. I played Susume ---> Tomorrow and I was honestly so upset that they were so happy? They sounded so happy, and I wanted to be that happy, I wanted to have fun and experience life. So I made myself a promise, a promise to be happy like they were one day.

I'm honestly so happy I'm in the Love Live community. The girls and seiyuu's make me so happy, and the people are so nice! I'm so happy I've gotten to see Muse thrive and their final live, Aqours get introduced and then thrive, and eventually getting to love them too! Now Nijigasaki is starting and I'm so ready to love every one of them!

Love Live has taught me to see the good in people and be more positive (I used to hate Maki and Riko, but now Maki's my 5th best girl and Riko's my 7th). It's honestly such a thrill to be playing this game and it's been so amazing playing and watching the franchise grow! Also, after 5 years of being a Love Live fan, I finally watched the anime! That's partially why I like Maki and Riko more.

I'm so happy where I am right now and Love Live is a huge part of my life. It's something I've grown up with and all the characters make me so happy.

I love you with all of my heart, Love Live!!!