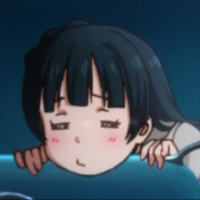 My Love Live Story is pretty plain. I saw Nico Nico Nii memes mixed with LLSIF memes, and downloaded the app one night in March 2015. Soon I started watching the anime, with a bias towards Nico purely because of the memes. But after the Love Wing Bell episode, Rin snatched first place. I nearly cried when I first saw Happy Maker, and waited for the movie. Once I finally saw it, I cried out of the pure happiness and celebration that came from Sunny Day Song. I played lots of LLSIF and got hyped over each and every song I unlocked. Later, I first saw Kimi no Kokoro wa Kagayaiteru Kai, and dismissed Aqours as an imitation of Muse. I thought their voices "all sounded the same", but they were all singing together so of course they'd blend together??? I brushed it off until Aqours wormed its way into LLSIF, which was when I noticed a chuuni in the mix. With that, I gave Sunshine a chance and ended up loving it too, Yohane remaining my favorite from the moment I saw her. I saw the 2nd season, and the movie as well, along with being introduced to the PDP girls. Rina's the cutest, but Kasumi interests me the most. But yeah, it's pretty typical stuff. I've made Love Live videos and fanarts all along the way, https://www.youtube.com/watch?v=4nPxS1xRJmM

(Oh, I also danced to Angelic Angel with a group of 5 for a school event! I can explain more about that in another post since this one's too long, but it was really something!)

My story's probably the most bland one you can find, but it doesn't make my love of Love Live any less strong. I've made several videos about it, drawn countless fanarts, and could sing along with nearly any song you throw at me. (it won't sound good, though!) Give me the chance, and I'll talk your ears off about that one Sunny Day Song dance cover with 100+ people, or why Thank You Friends should be in the movie, or how Rin's outfits change color more often than the rest despite her call and response being all about her color being yellow.

I'm not sure what to say as a last note besides the fact that writing this was fun, and this was a great event idea!