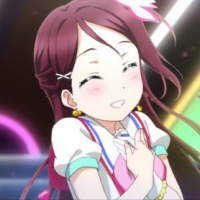 I got into Love Live back in March of 2016. I became aware of it in maybe the most typical way possible, through Nico Nico nii memes and SiIvagunner. I fell in love with it after that and binged μ's, was happy (and sad) to be a fan when their Final Live happened shortly after. Since then I've stuck with Aqours throughout their journey, bought tons of merch and met lots of friends. I can't be thankful enough for what LL has given me. To this day since 2016 I run a LL music stream called Love Live Radio, where I've met lots of like minded love livers~ I hope to continue supporting Love Live in the future, I'll be cheering on Nijigaku~